The word Douchebag has over saturated our vocabulary, in order to preserve it’s potency you need to be more selective with its usage. Here are different scenarios I’ve examined and determined if the word Douchebag is appropriate or not. 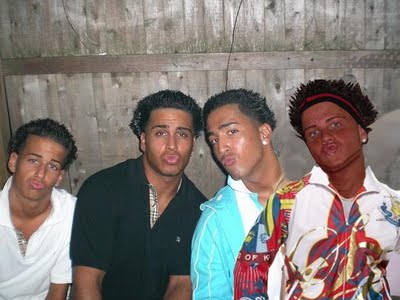 Have to start with this slam-dunk photo of douches. These four dudes form the Mt. Rushmore of Douchebags, with the pencil thin chin strap bearded fella on the end filling the role of Abe Lincoln. I hate judging books by covers, but these four clones force me to. This photo says these guys have no individual thoughts, love fake tans, crotch rockets, and hair glue. Also all four will live in their moms’ basements until they’re forty. Mt. Douchemore. 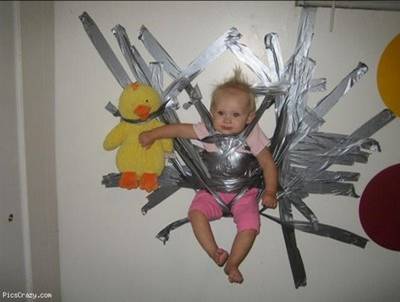 Not a bad parent, I assume the high chair broke. Notice the parent cares enough to use an entire roll of duct tape, and at $5.99/roll, you’re taping babies to the wall for special occasions only. This tells me something horrendous must have just happened, broken glass, chemical spill, or maybe the baby’s brother suffers from sibling envy and it’s his birthday? Or maybe Daddy needed a dart board? Who knows? What I do know is that the baby is loved because the stuffed animal is taped by the neck, while the baby is not. 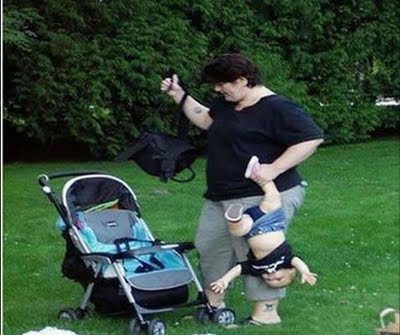 This parent sucks!! Very uncool, this baby is way too content on being held upside down, this implies that he’s been in this position before. It is also disturbing that the mother is way too casual holding with holding the infant like an umbrella. If the mom was full of panic, like ‘Oh no there is a tarantula in the stroller!’ then it would make this photo more tolerable. Unfortunately that’s not the case, it’s ‘Oh no, damn baby sat on Momma’s knock-off Channel Sunglasses…’ 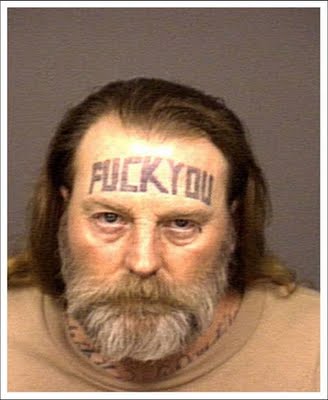 I like this guy because he doesn’t discriminate. It’s not you; He doesn’t want to give anyone a ride to the airport. A Secret Santa Present Exchange? He wants no part of that. Halloween night he’s not passing out candy, and he doesn’t give a damn he left the porch light on. Also when he is nice, it’s a pleasant surprise. He says ‘Happy Birthday’ to you, he fucking means it! Another scenario, maybe this dude dated the wrong woman, she was a pissed off feisty tattoo artist and this is her way of leaving a note in the morning. The other thing is I like the ‘Arial Black’ font on his forehead, if it was ‘Olde English Text’ he’d be a Douchebag, whatever I can still read his mind. 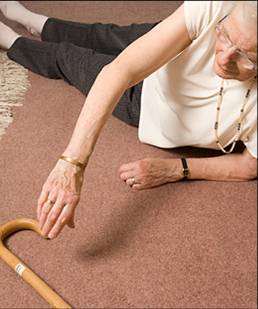 Complete Douche!! Not the old lady laying on the ground, but whoever took this picture. Really grandma bites the dust, and your instinct is not to help her up, but to get a camera and take pictures? Not cool, also I picture the photographer pulling back the old lady’s cane with his foot, while he goes to town with the camera. I don’t like this woman’s grandson, he’s a Douche! 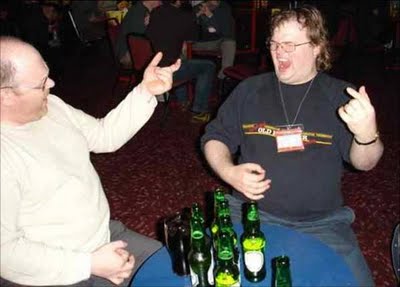 There is nothing wrong with spontaneous air guitar. You just got promoted third shift supervisor and you bowled a 151! Only thing to do, take the NJ transit to Atlantic City, crank up the Scorpions, drink some Keystone Ice and ‘Rock yourself like a mother trucking hurricane!” 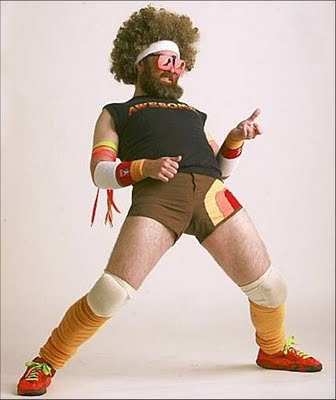 There is nothing wrong with spontaneous air guitar. This was not spontaneous. This is a 46 year old man dressed like Rainbow Bright complete with leg warmers and arm tassles. Yes, I know that this dude’s 46, because I pulled this photo off his Facebook page, and his knee pads are from 1964. If you’re going to put this much time and effort into looking like a jackass, just learn to play a real guitar, you obviously have the free time available. 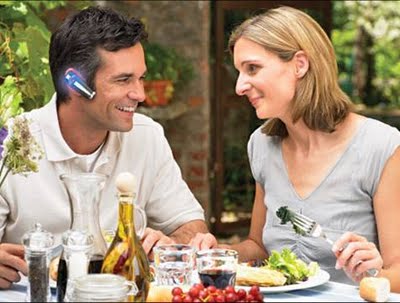 Both these people are Douches. First the guy, instead of wearing a Bluetooth just rip up $80 and superglue the pieces to forehead, less money and your face would look a little less retarded. Second, the lady in this picture is worse because she’s allowing him to look like a jackass. Unless her next move is to stab this guy in the face with the fork she’s a douche enabler. The only thing I like about this situation is her look of wilted optimism that they both deserve, the look that says, “…it’s been eight months I really hope this is the night he can sustain an erection.” Not that I’m familiar with a woman giving that look…I’m just saying…hypothetical.